Piccadilly started out in the 70’s as Manchester’s first Independent Local Radio station. It has always been know for it’s famous presenters.

Pictured below are Gary Davies, Tony Emmerson, Timmy Mallett and a young looking Steve Penk. The Timmy Mallett picture was featured on the BBC2 Documentary “Fame, Set and Match”

Piccadilly dropped the 261 from it’s logo as more people started to listen on FM. Chris Evans is pictured below who started his radio career at Piccadilly.

An Image change in the 90’s saw the Piccadilly name added to Key 103, something they still do on and off to this day. 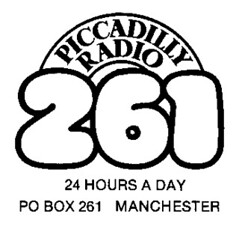